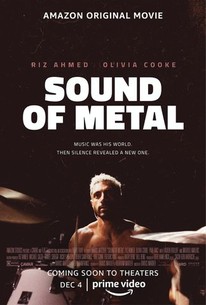 Where to watch: Amazon Prime

Synopsis: A heavy metal drummer is sent into a free fall when he begins to lose his hearing.

First off, let me say this is going to be a spoiler review. If you plan on watching the movie skip this for now. If not, enjoy. If you have any connection to music this movie is going to make you feel strong emotions. Sound of Metal is an incredibly emotional movie. There are so many themes that one could pull from it. Personally I look at this movie as a form of dealing with addiction. Riz Ahmed plays Ruben, a metal drummer who partners with his girlfriend, Lou played by Olivia Cooke. When Ruben begins to notice his hearing decline, he sees a doctor who tells him his hearing is down to 25%. When Ruben is told about his hearing loss he is sent spiraling. He doesn’t know what he is going to do. Determined to keep his hearing and continue touring with Lou, he puts himself in harms way for their music, and becomes fully deaf.

Eventually losing his hearing, Ruben goes to a deaf community where he works to deal with his loss. Addiction is a powerful force in this movie. It is revealed that both Ruben and Lou are recovering addicts. At this rehabilitation and education community, we are introduced to Joe played by Paul Raci. Joe, the head of the community, went deaf during the Vietnam war and like Ruben, was an addict.

Ahmed gives a deeply moving performance as he struggles to deal with his new life. You can feel the emotional roller coaster he goes on; the despair he feels with his loss, to the hope he feels while learning to live his new life. The reason I think this movie is about addiction is because even though he is beginning to find his peace, he is still drawn to the life he once lived. He misses Lou, and he misses his music. Determined to find his old life he sells everything he has to get a cochlear implant. A recovering addict, his addictive tendencies take him to a new low for him in this community. The community that Joe runs is opposed to implants. They believe in not treating their deafness as a disability or a handicap. After Ruben runs away from the community to get the implant, he goes back to talk to Joe  to see if he can stay while he waits to get the implant running. This is probably the most moving part of the movie. Joe did so much to help Ruben, and when Ruben finally came to Joe for help without being forced, Joe devastatingly turns him away.

Once Ruben gets his implants running you feel his disappointment when the sound doesn’t relay the way he imagines. He felt like life would go back to normal when he put them on. Instead of clarity his new sense of hearing sounds like scrambled radio noises. He goes to France to see Lou who has gone back to see her father. While spending some time there he sees how good life has been for her. She has been repairing her relationship with her father while improving her music career. Though they love each other, they part ways as they know it is best for them. While sitting in a park Ruben turns his implants off, and as he looks around he finally finds peace in the silence.

The acting in this movie was extremely strong from both the main cast and the supporting characters. I think both Ahmed and Raci should see many nominations this award season. Raci has one of the best monologues I have seen in a movie is some time and he does it with sign language. Like I said before, Ahmed makes you feel almost every emotion on the spectrum. Cooke doesn’t have screen time, but she and Ahmed have great chemistry. The movie is very authentic since most of the cast has connections or is part of the deaf community. You could see that the cast and crew worked to honor them and their place in the world. This is a great movie start to finish that everyone should see.