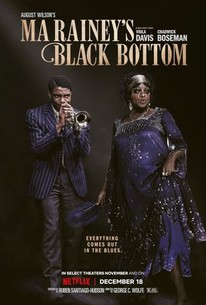 I will state from the start that my opinion may be a little biased, this is the last movie Chadwick Boseman shot before his untimely passing. That being said he plays an incredible role in this movie. The entire cast really gets the job done in this movie. Viola Davis as the title character Ma is amazing. She plays her role to perfection. She makes the brash, unwavering, uncontrollable Ma, someone who you begin to root for at the end of the film. Levee played by Boseman is someone who I wanted to root for from the beginning. He is ambitious, he wants to  do more than be a member of Ma’s band, he wants to write his own music and become a leader of the band. As the movie goes on though Levee starts to let his own wants go before the band, he becomes arrogant, and like Ma he also becomes an uncontrollable force to the rest of the band.

The movie begins showing the rise of Ma and her band going from her humble beginnings of playing tent shows to them being in a club in Chicago. This is where you first see Chadwick Boseman’s Levee and his exceptional skill. I felt blown away with Ma’s talent from the beginning. Showing her unquestionable talent. After the title sequence you are taken to Chicago where Ma’s band is on their way to record a record, Ma not being able to be found, she shows her hand fairly quickly with a power move of showing up when she pleases and making her agent and the recording studio wait for her. Once Ma arrives she begins to lay out her demands. She feels hard to root for making something that seems so simple extremely difficult, she makes the band wait on her, she demands to have her stuttering nephew have a speaking part on the album, she NEEDS a coke before she records. She is just difficult.

This movie is based on a play and the setting shows that. You are basically confined to two simple locations for the majority of the movie, one being the bands practice room in the basement of the recording studio the other being the sound stage of the same recording studio. These simple sets really help build tension as you add more people to little space. They set the stage for tensions to rise and things to get heated (pun intended) when they mention that the air condition doesn’t work and the studio is hot. I am a big fan of how movies like this use their setting as a tension builder. It makes me feel claustrophobic and it adds to the experience.

The band quickly begins to argue as they begin to practice while they wait for Ma to be ready. Levee wants to do his version of one of Ma’s songs while the band wants to keep it to the original. This small argument grows, while the band is wanting to practice Levee continues to talk about how he is going to get his own band together and write his own music. He talks trash to the other musicians but they begin to see his intentions when his attitude changes whenever one of the studio managers walks in the room. They accuse him of being subservient to the managers and that his tone changes around them because they are white. He then goes into a monologue about his childhood, his parents, and an extreme event that happened to him. You begin to see what built Levee’s character and how far he will go to succeed. While other members of the band tell their stories, the argument of God and his existence shows up concluding with Levee and Cutler (Coleman Domingo) getting into a physical altercation, with Levee revealing a knife he keeps on him. There is an old saying that if you reveal a knife or a gun in a movie or play it has to reappear later.

Cutler is basically the second highest member of the band, only 2nd to Ma. He tries to go reason with Ma, to try getting her to record and to try getting her to skip out on having her nephew have a speaking part. She in unwavering, as she is, and she has her own monologue of why she is the way she is. Her struggles and how once she begins recording the white men who have control of her records have control of her soul. She is unwavering because she knows what will happen to her and her music once she is no longer in demand. It also foreshadows the events that happen later in the movie.

They finally record, they get what they need. While recording Levee is doing what he does, and plays his music instead of Ma’s. Ma being fed up with his antics and fired Levee from the band. The only thing keeping Levee composed is the promises he was given to record his own songs. The rest of the band members go back to the practice room to pack up and wait to get paid. When Levee sees Mr.Sturdyvant, the studio owner he talks to him about recording his songs he gave him. Mr. Sturdyvant tells him he doesn’t think the songs will work and offers to pay him $5 a piece and while Levee is arguing with him Sturdyvant slips some money into Levee’s pocket for his songs. You can see the disappointment on Levee’s face, he goes back into the band room to get his things when one of the other band members steps on and marks his new expensive shoes. The emotions are high in Levee at this point, the knife reappears and Levee stabs the other band member. As Toledo, the piano player Levee just stabbed, dies in his arms Levee’s senses finally come back to him and he realizes what he just did and what he has thrown away. The final scene of the movie shows Mr.Sturdyvant recording “Jellyroll” the song that Levee had written earlier with an entirely white band. This is an important theme in the movie. As I talked about earlier, Ma was worried about what would happen to her music when it was given to the wrong hands. Appropriation of music has always been a topic of discussion, Elvis taking the brunt of the force in the past few years.

Overall I thought the casting was amazing. The setting was perfect for this movie. It made me feel claustrophobic and aided in the rising tensions between Ma, the band, the studio. This isn’t going to be a movie everyone loves, and I understand that. It is a slow movie. I thought the dialogue was incredible. I don’t know Ma’s story, I wish she was a more likable character. She may have been the blunt, brash personality she was played to be I don’t know her story. Although I can’t find much I didn’t like about the movie. I feel like there is high probability that both Boseman and Davis get awards or at lease nominations for their roles. The movie isn’t much more than an hour and a half. Definitely worth your time.